I have been trying for YEARS to track down information on this church.  My 2 great grandmother (Mary Ann Tinkler) was a member and she married my 2 great grandfather (Thomas Henry Smith) in this church.  Also, their two children (Ida May Smith and Samuel Thomas Smith) were christened in the church.  The only info I had been able to find was the marriage and christening data, and that was spread out over time.  Efforts to locate photos of the church were unfruitful.  Efforts to see if the church still existed were unfruitful.

Today I hit the jackpot, after all these years!  I found 3 photos online!!!  Doing the happy dance! 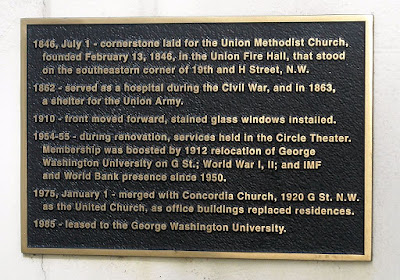 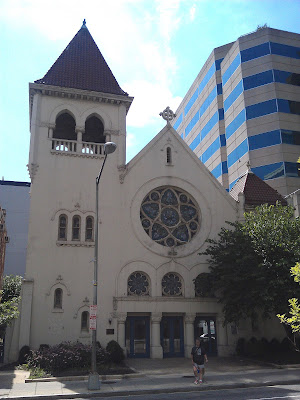 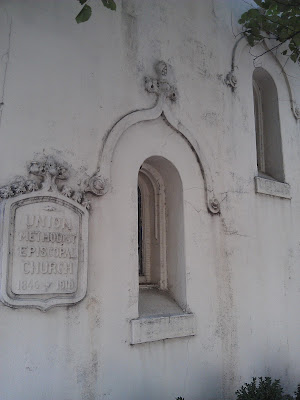 The plaque in the first photo and the engraving in the third photo confirm this is the building I have been looking for!  The building is now on the George Washington University grounds and is called Building XX.

The first plaque provided information on what happened to the congregation, showing them uniting with the Concordia Church in 1975.  Googling that church took me to the website of the United Church where they state: "The United Church represents a union of three traditions - the United Church of Christ, the United Methodist Church, and German heritage."

The plaque in the first photo also states that the church was used as a hospital in 1862 and then in 1863 was used as a shelter for the Union Army.  Thomas Henry Smith joined the Union Army from New York and was stationed in DC, according to his obituary which I posted two days ago).   Perhaps this is how / where they met?

I am hoping my email to them this evening proves out I have at last tracked them down.  I can only hope they still maintain the records from the old church.

My hope is that I can find out more information on my 2great grandmother Mary Ann Tinkler Smith and hopefully her parents, Samuel and Hannah Ann Riggles Padgett Tinkler.  I do know they are buried in Oak Hill cemetery, their bodies being moved there from an unknown location in 1859.

So, that is my excitement for today!  Woot!!!  Here's hoping more information is forthcoming!

I couldn't figure out how to insert pictures, so did links instead.


Yes, we moved around a lot!  That's what happens to military families.  :) 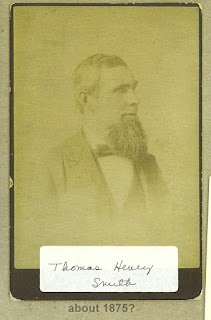 Thomas Henry Smith was born October 14, 1835 in Kandy, Ceylon, to Sgt. Thomas Henry Smith and Elizabeth Mary Butcher Smith.  He was the youngest of 5 children, two boys and 3 girls:   Mary Isabella, Sydney John, Frances Lenetta, Martha Ann and Thomas Henry.  Sydney and Martha both died and are buried in Ceylon, as was their father, who died in 1838.

Elizabeth and her 3 surviving children, Mary, Frances and Thomas, would have returned to England.  I can find no records so far of them from 1838 until their arrival in New York in 1849.

His obituary states that he came to Washington, DC during the Civil War to work in the Commissary Department.  The war ended in April, 1865 and he married Mary Ann Tinkler June 20, 1865 at the Union Methodist Episcopal Church.  This implies that they met during the war, possibly in connection with his job in the commissary department.  Mary Ann’s occupation during the war was as a huckster (a retailer of small articles, especially a peddler of fruits and vegetables) at the 24 Western and 379 Centre markets (according to city directories during the war years).  Check out my post of September 12, 2018 for updates on thoughts of how they may have met.

Following are city directory entries for where they lived and worked.  None of the residences are still in existence, unfortunately.

I still have lots more research to do, but at least I am making progress!

There are online photos available of the John Dickson Home at the location it occupied at the time Thomas resided there.

Center Market as it appeared during the Civil War.  See http://www.streetsofwashington.com/2010/05/center-markets-chaotic-exuberance.html for a good article.

I have finally been able to track down some records for the time that my gggrandfather and his family were in Ceylon.  Thanks to Eileen Hewson at the Kabristan Archives (kabristan.org.uk) I now have this information.  And thanks to my cousin Judy for pointing me to the website!

These are the bits of information I received:

NOTE:  Catherine Stafford was a sponsor for both of these children.  Mrs. Martha Butcher could be Elizabeth’s mother.
Bible records have Martha’s death as March 16, 1836 in Colombo, Ceylon.  No online records have been found to confirm this.

I've done a summary of what I know so far about Thomas Henry Smith 1800-1838,  This information comes from Bible pages and also from the birth-burial records I found online.

His second child, Sidney John Smith, was born June 14, 1830 at the Garrison of Colombo, Ceylon and died age 2 months, 22 days.  Bible records have his death date as Sept. 29, 1830 but burial records have him buried Sept. 5, 1830 in Galle Face Burial Ground, Colombo, Ceylon.  The Sept. 5 burial date fits better with the age if the family Bible records birth date is correct.

Martha Ann Smith was born October 24, 1833  I found no burial records for her on the Kabristan Archives website.

Thomas Henry Smith, the last child, was born October 14, 1835 in Colombo, Ceylon. He died November 3, 1926 and is interred at Oak Hill Cemetery, Washington, DC.  I did not find any birth records for him on the Kabristan Archives website.